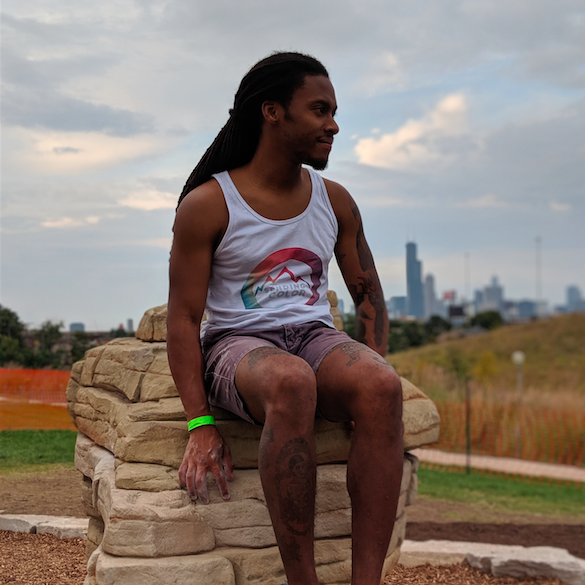 In April of 2019, Sending In Color teamed up with The North Face (TNF), the Trust for Public Land, and the Chicago Park District on an exciting new climbing project in Chicago!

As a part of their “Walls Are Meant For Climbing” program, The North Face has been collaborating with local organizations and leaders in cities across the country to improve accessibility to climbing by building artificial boulders. One of the goals of this project is to engage nearby communities in climbing and to inspire people of all ages and identities to get outside!

Henry C. Palmisano Nature Park (“Palmisano Park”) in Bridgeport in the south side of the city was chosen as the location for the Chicago boulder. Bridgeport is one of the most ethnically diverse neighborhoods in Chicago (31.9% White, 2.8% African American, 34.5% Asian, 28.8% Hispanic or Latino, and 2.5% Other Races). Palmisano Park spans over 27 acres carrying its own transformative history — an ancient coral reef, limestone quarry (utilized to build the Illinois and Michigan canal), and landfill — all before becoming an expansive green space in 2009. The park shows off native ecosystems, including prairie grasses, flora, simulated wet lands, and a pond. Some of the original limestone remains preserved as a wall that lines sections of the park. Being an intersection of industrial, natural, and residential, this park was a prime spot for the boulder.

An important aspect of this project was to engage local communities who would be utilizing the space — youth from the Valentine Boys & Girls Club located in Bridgeport, and local Chicago climbers. The morning session was spent at Brooklyn Boulders (BKB) Chicago, where SIC team members, BKB staff, and TNF athlete, Nina Williams, guided the youth through various climbing stations that included top rope, auto-belay, and bouldering.

For the afternoon session, the youth toured Palmisano Park to get a feel of where they wanted the boulder and how they wanted it to look like. Everyone met back at the Valentine B&G Club for lunch, presentations, and the design session.

Presentations allowed the youth and SIC team to learn more about the history of Palmisano Park and the significance of this project. After learning more about the potential of the boulder, the youth and SIC members broke out into smaller groups to brainstorm and design boulder concepts using colored pencils, paper, and clay. There was a large range of ideas — an arch, fossils in the rock, a unicorn, a slide to come down from the boulder, and more. The general consensus was that there would be a boulder garden. One of our very own SIC team members, Alex, designed one of the main boulders featured in the park (pictured right).

The boulders were unveiled during a ribbon cutting ceremony on Saturday, September 21, 2019 attended by SIC members, Valentine B&G Club youth, their families, and many others from the community. We recommend that whether you are a local or visiting Chicago that you stop by Palmisano Park and get some sends with our iconic skyline in the background!

Go check out the boulders and tag

Location: Palmisano Park is located here — Map. The boulders are located in the southwest corner of the park closest to the intersection of 29th St & S Poplar Ave.Street parking available.